Some of you will be disturbed by what you see on our web site and in the material we distribute. You are not interested in truth, and will use overworn clichés such as "you can make the Bible say anything" to justify your ignorance and unwillingness to take an honest look at what the Scriptures teach. You would rather parrot the politically-correct lies told by the media and Judeo-Christian churches of today. You follow the religious traditions of men, yet reject our belief in traditional Christianity, "the faith once delivered", because you love the world more than God.

We are careful to support what we say with verifiable facts. For instance, the Hebrew word for Adam (Strong's Concordance #120) means "ruddy, to show blood, flush, turn rosy", in other words, a White man. Archeology has proven that there were other races on the Earth many centuries prior to Adam (who Bible chronologists date from about 4,000 - 6,000 BC), the Bible also teaches this in Ezekiel 31 and elsewhere. Adam was not the first man, but the first White spirit-man, a son of God (Luke 3:38) made in His likeness (Gen. 5:1). Common sense and the study of genetics tells you that all races could not have come from Adam, especially those who lived many centuries prior to him.

True Bible, true history, true science, and common sense do not contradict one another. The above paragraph makes no value judgment of any kind, it only presents documented evidence. So how will some of you respond to this knowledge, will it be with more Biblical, historical, and scientific facts, logic and common sense? No, instead of joyfully receiving this marvelous truth, many of you will react with emotionalism! You will respond with remarks about love and hate, and charges of racism. It is not love to hide your head in the sand and ignore reality, nor is it hate to point out that all peoples are not created equal (neither are any two people within the same race). Anybody who has ever had a pet that they love, should be able to see it is not hate to admit that they were not given many characteristics of a higher species. The facts cited have nothing to do with racism; but are we racists? If your definition of racism is hatred of other races; no, we do not hate the other races. God Himself made the races different, and He found it to be good; He loves all of His creations in their proper order. If you define racism as "a belief that human races have distinctive make-ups that determine their respective cultures" (the dictionary definition), then we plead guilty as charged. It is not the physical difference of race, but the mental and spiritual differences that have created cultural differences. Observed and verifiable facts show that the White man has excelled in the areas we equate with being civilized (Law, government, his religion [Christianity], architecture, art, music, clothing, inventions, etc.). All the politically-correct fairy tales of the media and government schools will not change this fact. We prefer the culture and abilities historically demonstrated by Christian White men over that of all other races. However, if you value athletic ability or some other trait above these achievements, you may consider another race (or even a species of animal) to be superior. That is your right, but do not confuse your value judgment with somehow negating the biological and spiritual differences that exist between races. And don't think that you are more righteous than God, who created the separate races in the first place; or think that you have to make up fables to prove all races came from Adam; the Bible does not teach this. The Bible is full of "racism"; for instance, where our Saviour calls a woman a "dog" because of her race and tells her He was not sent to her, but only to the lost sheep of the house of Israel, and that she is not entitled to the children's bread (see Mat. 15:24 - 26). The fact that she was entitled to certain blessings ("crumbs") does not change her status. Another of the many examples we are taught in Scripture is given in Numbers 25, where God stops the plague in Israel because Phinehas executes the race-mixing couple. We could give many more examples. If you don't like what we're saying, don't complain to us, we didn't write the Bible; as watchmen we are only reporting what it says, and all your likes and dislikes won't change it. "Am I therefore become your enemy, because I tell you the truth?" (Gal. 4:16). We teach you this in Christian love, because we want you to grow to a maturity where you can understand the "strong meat" of Scripture; but alas, some of you are dull of hearing and will probably remain babes consuming pabulum in the nursery schools of churchianity forever. Stop your ears if you must, but we thank God for the elect remnant who have ears to hear and eyes to see.

If you think you have eyes to see and ears to hear, send for our material and find out who you are, where you are from, why you are here, and where you are going. Learn "the way of God more perfectly", including who the enemies of our Saviour and race are. The key to understanding your Bible and all history, past, present and future, is the Gospel of the Kingdom that we teach. Christians, tired of politically-correct propaganda and called to a higher level of understanding, will receive information to unlock knowledge and reveal amazing truths hidden from our people. 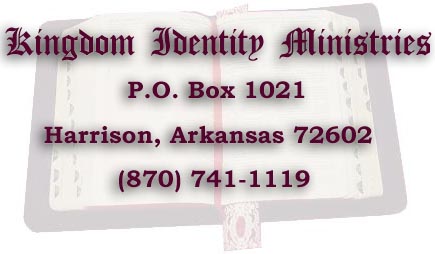